Posted by Max on November 29, 2016 in Book reviews, innovation | Leave a comment

‘Innovation – The Attacker’s Advantage‘ is an old book.  Written in 1986, the author talks about the rise of compact disks and the new science of biotechnology.  However, there is much to be learned from this book.

One of the main points that this book makes, is that all technology has its natural limits and constraints.  These constraints mean that incremental improvement can only improve a technology so far, and as a technology become more mature, further improvement comes at an increasing cost.  This finding produces the ‘S’ curve (see below left).

If we assume this observation to be correct (Richard provides several examples), then there is an important lesson.  Technology advantage lies with people who can identify the limits of current technology lie (i.e. where the technology is on the S curve) and those who can find new technology with higher limits.  The new technology, with high limits, will create a new S-curve (see below right).  Richard calls this a ‘discontinuity’.

In the book, Richard gives several examples of technology reaching its natural limits and then being surpassed by newer technology.  He uses the transition from sail to steam powered ships, and from cotton tyres to polyester.  The transition from cotton tyres to polyester is interesting, as it highlights the failure of US companies (at least initially) to realise both the limits of cotton and then the limits of rayon, all the while European manufacturers were focusing on nylon and the polyester.  As a result, European companies managed to steal huge market share from the US incumbents. 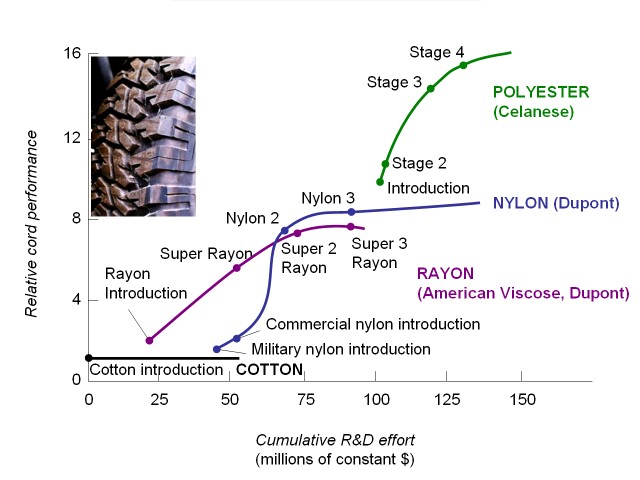 ‘Innovation’ is a fascinating book, written by someone who spent over thirty years in the field of innovation.  While the book and the examples are dated there are several key lessons.  That all technology has limits and it’s advance follows an S-curve.  As a leader you need to understanding where your technology lies on the S-curve, this will help you understand when the return on your R&D/PD effort is starting to wane, and thus you need to invest in developing newer technology.

Link to the book on Amazon