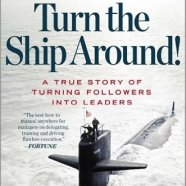 How do you truly empower your team?

A lot has been said about empowerment and engagement (see three books I reviewed recently Team of Teams, Followership, and The Heart of Change).  What is different about David’s ‘Turn the Ship Around’ is that David uses his highly compelling personal story, turning around one of the worst performing submarines in the US Navy, with academic research and personal reflections. How does he accomplish this?

Simply David changes the dynamic with his crew.  David moves from a leader-follower relationship to a leader-leader relationship.  It is very telling that David’s definition of leadership is “communicating to people tier worth and potential so clearly that they are inspired to see it in themselves“.  But how does he make this transition?

The book is divided into four chapters: starting over, control, competence and clarity.  Through these four chapters, David charts the success and failures of how he transformed his crew and himself.

Starting over.  The first chapter highlights why much of the ownership and decision-making has been taken out of many people’s lives.  Either in the Navy or in business, there are rules and procedures that have been built upon again and again.   David argues in this chapter that all these rules and procedures have reinforced the leader-follower dynamic, where the leader provides detailed guidance and makes all of the decisions.  The results is a disengaged and uncreative workforce, that is afraid to take risks, in case they fall foul of the specific orders given them, or the many rules and procedure that must be followed.

Control.  This chapter explains how David released control to his team.  He argues that you need to find the ‘generic code’ of your organisation and rewrite it.  By questioning existing rules and process openly with his team, David found ways to push decision down to the lowest possible level.  While he never ceded command, he allowed other to exercise control, thus empowering them and making them own their respective areas.  To ensure that he retained an awareness of what his team was doing, David shifted his crew’s terminology from “Permission to ….” to “I intend to…”.  He also encourages his team to ‘think out loud’, so that everyone is constantly re-orientating on new information, and decisions can be made more quickly, as context does not need to be explained.

Competence.  In part 3, David shows how you to build momentum and change the wider organisation.   He has five pieces of advice:

Clarity.  In the final chapter David elevates his crew to think about the wider organisation and boat.  By exposing his crew to the wider context, their role in the plan, he reduces silo mentality and parochialism.  He offers several tips:

‘Turn the ship around’ is one of the most compelling books I have read this year.  Read this book if you want a game plan to transform your organisation and how you lead.

Link to the book on Amazon